In the latest of our irregular staff lockdown posts our Finance Director Mark reveals what goes on in his secret underground bunker (aka the dining room table).

Those of you who are regulars on our Facebook page will know that I am a pretty keen cyclist. I ride to work most days, and have done several long sportive rides. 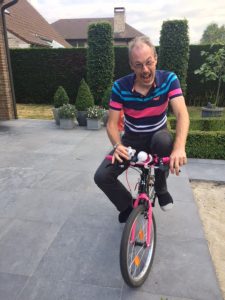 (not on that bike, though)

This year I set myself the aim of cycling 500 miles in one month. I had hoped to achieve this with some longer rides, but due to the need to be sensible during lockdown I rode most days very locally during April, and actually managed to reach my target.

Then I got a shin splint so I had to be even more sensible, but what to do with my extra time? I haven’t furloughed myself so I’ve still been at Crow Trees a few days a week, but not full time.

So, what about those Daleks? Well, I’ve loved Dr Who since I was a kid, and for many years now I have been collecting remote control Daleks. They are about a foot tall, and I have a complete set of every one ever sold, plus a few rarer limited editions and prototypes. Here they are on display in my lounge: 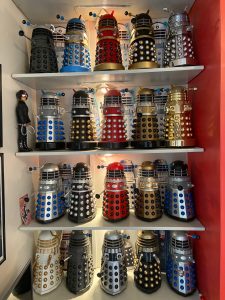 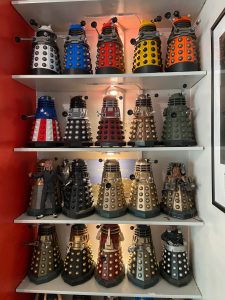 (yes, I have the most tolerant wife in the entire world)

A while ago I discovered that with a screwdriver or two (not a sonic one, alas), some patience and a bit of brute force I could do this. 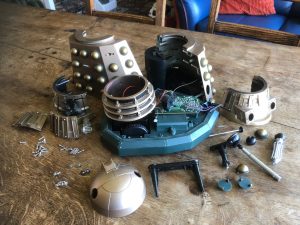 Which meant that I could customise Daleks to make colour schemes that weren’t ever officially released! I try to get broken ones on eBay as they tend to be pretty cheap. The team at Crow Trees know that when a certain size of box arrives addressed to me, it will likely contain a Dalek. I’ve done quite a few like this, but over lockdown, I was able to get serious. The Lockdown Dalek Project resulted in these: 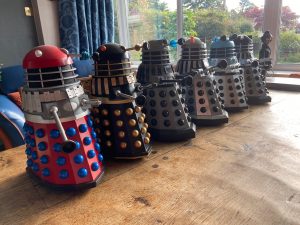 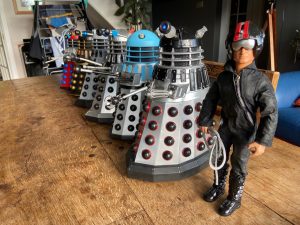 If you are still interested by this stage, the red one is from a Dr Who book cover. The black and gold one is from the Children in Need special Curse of Fatal Death (watch it here!). The next two are new Daleks from the 2000s painted in old Dalek colour schemes. The blue one appeared in this very strange colour scheme on the BBC’s Pebble Mill programme, and the final one is from the cover of a new series of audio books called Time Lord Victorious.

The man on the end is an Action Man that I accessorised to resemble a Roboman from the 60s Peter Cushing Dr Who movie. You can’t see it, but he has Eagle Eyes. Do you remember those? I don’t, because my parents never bought me an Action Man, which may go some way towards explaining the contents of this blog.

I still have a few more Daleks I would like to do, but for now both storage space and Elaine’s patience are running a little short, and Rebecca and Alan have refused to allow me to display them at Crow Trees, so it’s back to the cycling.

Waiting to welcome you!

Here’s a team photo showing the new PCTC uniform for 2014. Don’t we look smart? And also new this year, a...

Diagnosing respiratory symptoms over the phone

We have another excellent blog from one of our tutors Andrew Booth, a Respiratory Nurse Specialist working in a GP...