Diagnosing respiratory symptoms over the phone 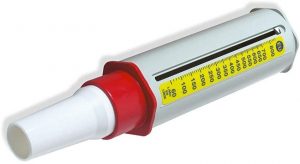 We have another excellent blog from one of our tutors Andrew Booth, a Respiratory Nurse Specialist working in a GP practice.

Andrew discusses the difficulty of knowing what to do when a patient reports respiratory symptoms returning after several years without an inhaler. You can’t observe the person, listen to their chest or check peak flow, so what can you do? Andrew provides step-by-step advice on the right questions to ask to assess the patient, and importantly how to provide reassurance. There is also a practical guide to reviewing lung function results over time.

DIAGNOSING OVER THE PHONE

What can you do when your patient’s dormant asthma or suspected respiratory symptoms seem to be returning after several years’ “absence-without-inhaler”? It’s so difficult when you speak with a patient over the phone, and they’re worried that their asthma is coming back at the same time Covid-19 is reaching its height. You can’t listen to their chest, check their peak flow, or temperature, observe their resps or sats.

But you can talk to them about their symptoms. Remember the four symptoms of asthma; typically, people with asthma have more than one:

Ok, you can’t do the last one, and I’ve nearly stopped asking about it over the phone. Sometimes the patient will describe themselves as “wheezy” but in reality, this is probably breathlessness they are describing, rather than the high-pitched polyphonic wheeze you hear through a stethoscope. (Note to self – when all this is over, and we’re allowed to see patients again, grab yourself a good quality Littmann stethoscope and start listening to chests if you aren’t already).

If they are too breathless to complete a full sentence (and they haven’t just been rushing up the stairs to grab the phone) then they almost certainly need immediate medical attention.

Green sputum suggests that they may have an active chest infection. If they’ve had green sputum for several weeks or longer, it may indicate chronic bronchitis or even bronchiectasis. Double-check for any spirometry readings, chest X-rays, or respiratory specialist letters. You can quickly look for Spiro readings in the Numeric Results of System One (apologies to Emis people). I have mine set up with every lung function code so I can review readings over time.

Look for the FEV1/FVC ratio first. If this has been consistently below 0.7 then they probably have COPD (with or without asthma). It’s the first thing I check. Then look at the FEV1 – if it has been up and down all over the place, indicating variability, then this is a reasonable indicator of previous asthma.

Of course, you need to ask about temperature (you never know, they may actually have Covid-19) and also fatigue, sore throat, muscle pain, and loss of taste or smell too.

Ask about blocked or runny nose, indicating that their symptoms might be caused by post-nasal drip. This isn’t something that’s always easy to diagnose, but it can be helped by intra-nasal steroids or anti-histamines, both of which can be purchased over-the-counter.

If it’s just a cough on its own, then it might be gastro oesophageal reflux causing the cough (sometimes known as cough-reflux).  Ask if their cough is worse just after meals. Cough reflux typically comes on a few minutes after food, or when lying down. They might also have had gastritis or bloating, heartburn, or acid brash (taste of acid in the mouth). PPI therapy or just simple Gaviscon after meals and before bed is usually the key to this.

Next, ask how often their symptoms has been occurring. This starts to give you an indication about how severe or urgent it may be. Are they getting symptoms every day, or just a couple of times a month? Don’t accept “only when I exercise” as a response – ask how often it is.

This is really key to diagnosing asthma; an identified trigger causing an asthma symptom. Until the last few weeks, asthma could often triggered by cold weather, going from a warm room to a cold outside, and also exercise. Some people will often say “I get a cold / flu / virus and it goes straight to my chest.” This is could be circulating respiratory virus (not necessarily Covid-19) that is triggering their asthma. From April onwards, pollen becomes more of a problem, especially grass. Listen out for people complaining about lawn mowing! And also watch out for those big yellow fields of Rapeseed!

Home peak flows are always good to do if you suspect asthma. And now, at a time when we can’t perform Spirometry, home peak flows are more important than ever. I always spend time explaining that asthma can make the small airways narrower, so that the speed of air coming out of them goes down. This lowers the peak flow. And asthma can come and go, making the patient have good days and bad days, which is why it’s really important to do readings morning and night for at least two weeks. The chart included with each peak flow meter is good enough, and you don’t need any fancy booklets or symptom diary cards. They can drop the completed chart at reception, or much better still, e-mail it to the surgery. I’m currently looking at using our text messaging system so that they can text a photo of the chart back to me (some patients have already done this with their home BP readings). Sometimes I talk to the patient about doing readings “before and after” exercise or salbutamol, which provides even more information. I’ve found over the years that some patients do this spontaneously.

And although you can’t do Spiro, you can create a waiting list for when the madness is all over – although how long that list could become is anyone’s guess!

Normally you could check bloods for full blood count (looking at eosinophil levels), CRP (to rule out infection) or BNP (to exclude heart failure). These may not be considered at the moment under pandemic restrictions, so you could just look at historic FBCs to see if their eosinophil count has ever been above 0.3, which would point you in the direction of asthma.

And of course, every patient is worried about getting Coronavirus, or giving it to their family, or being put at risk from everyone they work with, and should they have a letter from the government. There’s so much anxiety around what people’s employers will do or say.

One of my GPs asked me to call a patient from their telephone triage list who was described as “not being able to breathe” and “were frightened about being re-deployed to the front line.” I made the call, expecting to be talking to someone who couldn’t complete full sentences and needing a blue light. They told me they were an unqualified NHS health worker. They spoke very rapidly (completing several sentences without pausing for breath) about this cough and breathlessness they had been experiencing, that they used their inhaler regularly, but they thought they needed extra inhalers just in case they were made to go and work with Covid patients.

After a few minutes of chatting in my very best, calming, casual voice, I found out that their cough was unproductive, happened at night when lying down, and was accompanied by breathlessness. They had no chest tightness, or noisy breathing, and were able to breathe through their nose easily. They hadn’t got a temperature, or fatigue, no sore throat or headache, and no heartburn or indigestion symptoms. They did, however, have a sibling with “severe asthma” who had been admitted a few times. They said their symptoms came on mostly at night, and it was usually two or three nights a week. They had a Salbutamol Easyhaler, (which had been prescribed twice, and not on repeat) which they said they had taken during the night when the breathlessness came, but that they weren’t really sure if it was helping. There was no lung function, and no respiratory diagnosis recorded. I suggested she may have asthma, which might be triggered by anxiety, and talked them through how to do peak flow readings at home. I sent them a text link to the Asthma UK peak flow page, and said I’d call in three weeks to review the readings. I also spent time rationalising what re-deployment might look like, that it was probably unlikely they would be deployed to an acute area as they had no experience of hospital setting. They agreed to speak with their line manager, to see what plans their organisation were putting in place during the pandemic. By the end of the conversation, they were talking slowly and quietly, and were in agreement to do the things we had talked about.

I spoke with the GP, and we both agreed that it was probably anxiety related breathlessness. In times like these, it’s essential that we have teamwork and colleagues who understand.

The recent impact of the long trial on the benefits of HRT has again rasied the whole  question of clinical trials....

A Pat On The Back!

Beavering away at an endless Cardiovascular Clinic on a wet Thursday afternoon we sit listening with half an ear to Mrs...

The National Review of Asthma Deaths was the first fully comprehensive review of deaths from asthma across the UK. Led...